Bertrand Kima Jun 29, 2020 2
As he seeks to insert rival Joe Biden’s health into the presidential campaign, Trump has voiced escalating concern about how it would appear if he contracted coronavirus and has insisted on steps to protect himself, even as he refuses to wear a mask in public and agitates for large campaign rallies where the virus could spread.
When he travels to locations where the virus is surging, every venue the President enters is inspected for potential areas of contagion by advance security and medical teams, according to people familiar with the arrangements. Bathrooms designated for the President’s use are scrubbed and sanitized before he arrives. Staff maintain a close accounting of who will come into contact with the President to ensure they receive tests.
While the White House phases out steps such as temperature checks and required mask-wearing in the West Wing — changes meant to signal the country is moving on — those around the President still undergo regular testing. And even as Trump attempts to put the pandemic behind him by encouraging reopening and downplaying the new surge, there are signs of the still-raging pandemic even within his orbit.
This week, the virus again struck members of the President’s staff, this time a collection of campaign aides and US Secret Service personnel who had been working on Trump’s campaign rally in Tulsa.
And CNN has learned a third White House staffer who was recently in Trump’s vicinity also tested positive. According to two sources familiar with the matter, the staffer is a senior economic official who was in the Rose Garden with Trump during an event this month. Because of privacy concerns, CNN is not naming the individual. 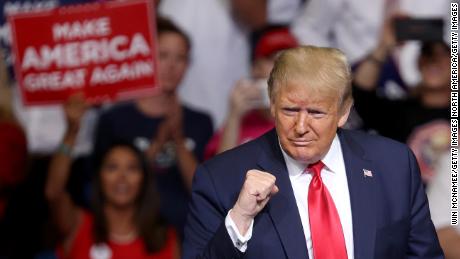 As infections surge and several states grind their reopenings to a halt, the President’s political advisers and allies are growing concerned he is moving on from a pandemic still gripping the nation — and, this week, members of his own team. Trump’s absence from Friday’s coronavirus task force briefing only heightened the impression that he is leaving the pandemic response to others.
None of the nation’s top health experts — dropped off in the circular drive in front of the Department of Health and Human Service — seemed overly concerned that Trump wasn’t there. The coronavirus task force meeting had been moved from the White House Situation Room to the health agency’s headquarters without much explanation. Vice President Mike Pence arrived with his security in tow and several aides were driven from the West Wing in black suburbans.
As the meeting got underway, the President was back at the White House tweeting about attempts to tear down statues and abruptly canceling a planned trip to New Jersey so he could, he claimed, ensure that “law and order” is maintained over the weekend.
His absence at the meeting across town seemed largely unremarkable to his staff; Trump hasn’t attended a formal task force meeting since April, two sources familiar with his attendance say.
“The President continues to lead the whole-of-government response to Covid-19 and regularly receives updates on the work of the task force from the vice president,” White House spokesman Judd Deere told CNN.
One official suggested Trump did not attend the briefing so he would be spared from criticism if it went awry.
Though Trump regularly phones Health and Human Services Secretary Alex Azar for updates on the outbreak, he rarely speaks to the other members of the task force. While testifying on Capitol Hill this week, the director of the US Centers for Disease Control and Prevention refused to say when he had last talked to Trump. And the US Food and Drug Administration commissioner and other top aides conceded it had been weeks since they had last spoken with him.
Instead of focusing on the pandemic, Trump has zeroed in on more familiar territory: waging a cultural battle over attempts to tear down statues and monuments that have become controversial. While Pence told reporters Friday that it was Trump who had directed him to hold the first coronavirus task force briefing in eight weeks, the President made no attempt to promote the briefing, which he always did when he was the one headlining them.
Those tasked with getting Trump reelected have grown worried about polls showing voters rejecting how he’s handled the outbreak so far. Yet Trump himself has shown little willingness to readopt the wartime stance he once assumed daily from the White House briefing room, leaving the public messaging to others.
“At some point in the future, historians will marvel at the fact that the President lost ground during a pandemic and then during mass riots,” the Fox News host Tucker Carlson said during his opening monologue Thursday night. “Both crises should have highlighted his strengths. They were naturals for him.”
“An awful lot of people voted for Donald Trump precisely to avoid a moment we are now in,” Carlson said. 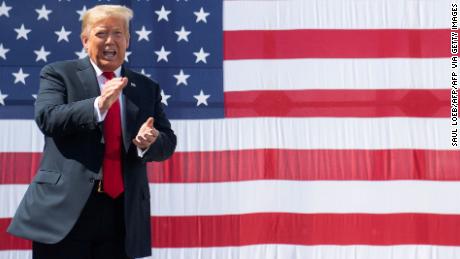 Even as Trump attempts to move on, the protective bubble around him has grown thicker. Aides say the steps are necessary to allow the President — by all definitions an essential worker — to continue leading the country amid the pandemic.
But people familiar with the matter say the precautions also stem from Trump’s own insistence that he not contract the disease and his heightened awareness of how a sick President would affect both the country’s view of him and his ability to command a response to the pandemic.
After Trump told aides at the beginning of the outbreak he must avoid getting sick at all costs, efforts to prevent him from contracting the virus have progressively become more intensive and wide-ranging. Early steps such as keeping more hand sanitizer nearby eventually evolved into an intensive safety apparatus, including the testing regimen requiring dozens of staffers.
So far the efforts appear to have been effective, at least at preventing the President from contracting the virus. But events of the past week have also underscored the primacy of Trump himself to the safety measures, with the safety of staffers who compose his massive footprint coming second.
That was clear even before Trump landed in Tulsa, Oklahoma, for a rally last Saturday night. In the hours ahead of his arrival, a handful of campaign staffers tested positive for the virus. In the days since the rally, several more have been found to have contracted it. Many campaign staffers, who had hoped to be planning more rallies in the near future, decided to quarantine at home instead. And dozens of US Secret Service personnel were told to quarantine after working the Tulsa event.
This week, the CDC updated its list of who is at increased risk for getting severely ill from Covid-19, removing a specific age threshold and instead warning Americans that the risk steadily increases with age. The CDC also added to its list of underlying conditions that increase the risk of severe illness, to include obesity and serious heart conditions.
Trump, who turned 74 on June 14, is considered obese, according to the results of his last physical, which showed he weighed 244 pounds and stands 6 feet 3 inches tall. The results from his first physical while in office indicated he also had a common form of heart disease.
Trump’s most recent physical results showed his cholesterol is lower than when he first took office. But other aspects of his health remain unknown. The summary of results provided by the President’s doctor this year did not include the same level of detail Trump provided in 2018, when he insisted he be administrated a mental acuity test to put to rest questions about his sharpness.
Trump’s abrupt trip last October to Walter Reed National Medical Center remains the source of questions and speculation, even among some of his aides. The White House insisted the trip was meant to get a head start on his yearly physical, but it was not announced ahead of time and the results of the physical were not released for another six months.
The President has told officials repeatedly that he cannot get sick, and he grew upset when he learned last month that one of the military valets who handles his food and drink had come down with the disease. Trump asked how it was possible that someone with such intimate access to his person could have contracted the virus, and in the days following the revelation appeared cautious around people he did not know well, people familiar with his reaction said. 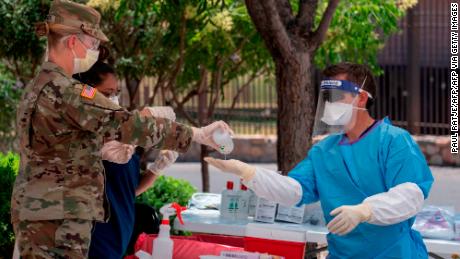 Trump appeared genuinely alarmed when people close to him contracted the disease, seeing in their experiences a fate he was adamantly working to avoid for himself. He raised repeatedly his friend Stanley Chera, a New York real estate developer who Trump had been friends with for decades. Trump described his surprise at Chera’s descent from contracting the virus to entering a coma to eventually succumbing to the disease.
Later, Trump was surprised again to learn that one of his closest foreign allies, British Prime Minister Boris Johnson, had fallen seriously ill from the virus, at one point being admitted to an intensive care unit in London. Trump asked for frequent updates on Johnson’s deteriorating condition and later asked to speak with him as soon as he was on his way to recovery.
Trump, who has long defined himself as a germaphobe, openly chastised aides who coughed or sneezed in his presence even before the virus. But amid the pandemic, any signs of respiratory sickness have been met with glares from the President. When Dr. Deborah Birx, the White House coronavirus response coordinator, told a briefing she’d had a fever and self-quarantined, Trump jokingly backed away.
When Polish President Andrzej Duda, Trump’s first foreign visitor in months, came to the White House this week, he and his entire delegation were administered coronavirus tests, as were the US officials who participated in the meeting.
For months, anyone who comes into close proximity with the President has been administrated a coronavirus test, though the Abbott Laboratories product used by the White House has raised concerns for high rates of false negatives.
Trump, who in the 1980s and ’90s openly discussed his success in avoiding a sexually transmitted disease — “It’s Vietnam,” he told Howard Stern, “It is very dangerous. So I’m very, very careful” — also took the controversial step of taking a round of hydroxychloroquine in a bid to prevent coronavirus.
Though the drug has not been proven to prevent infection with coronavirus, Trump had publicly touted its benefits and he announced midway through his round that he was taking it. Later, his doctor said Trump’s medical team used an electrocardiogram to closely monitor the President’s heart while he was taking the drug since some studies have suggested it could cause severe heart problems.
This story has been updated with further reporting on Trump and Friday’s briefing.

Mexico’s President has a private plane, but is flying commercial to meet…